"The only source of knowledge is experience."  -Albert Einstein

Homeopathy finds its first roots recorded in the writings of Hippocrates (470-400 BC), the "Father of Medicine," who wrote that "Disease is eliminated through remedies able to produce similar symptoms." These ideas were later rediscovered by Dr. Samuel Hahnemann (1755-1843) who, through a process of experimental and scientific discovery, largely developed what Homeopathic medicine is today.
Dr. Hahnemann was a very famous physician of the dominant school of medicine. He was a successful practitioner, but deep within he was very troubled by the limited amount of useful medical knowledge of his times. He realized that, very ironically, the 'medical science' is not based on anyfundamental scientific laws. And the theories on which the medicine of his time was based were vague and hypothetical. And the treatment often caused more harm than good. So he left his medical practice and started translation work instead.

The Birth of Homeopathy

While translating Cullen's Materia Medica, he decided to probe into the action of Cinchona bark, which was known to have curative power in malarial fevers. To do this, for several days he took some extract of Cinchona bark himself. To his utter surprise, he soon developed symptoms similar to those of malaria including sweating, shivering and weakness. This was a revelation to him and it was this experience that led him to form the Law of Similars. To test this idea further, he did similar experiments with various substances on himself and others and found all his experiments confirming the idea that a substance capable of creating symptoms in a healthy person can also potentially cure those symptoms in someone who is sick. He concluded that this is a general law and called it 'Similia Similibus Curantur', i.e.; 'Like Cures Like' - the fundamental principle on which Homeopathy is based. This law has been confirmed by thousands since then. Dr. Hahnemann further developed this knowledge, proved hundreds of new medicines, developed methods of their preparation and administration and gave many guidelines regarding health and disease, thus giving birth to a complete and new system of medicine.

Homeopathy in the World Today

After Hahnemann's death, homeopathy spread like wildfire through Germany across Europe and to England in 1842 with Dr. Harvey Quinn and became increasingly popular there. Homeopathy is now the second most common form of alternative medicine in the world behind herbal and oriental medicine. It is said to be the fastest growing form of alternative medicine. It remains popular in Great Britain as the Royal Family has been treated by homeopaths exclusively over the last 120 years. India has a tremendous number of homeopathic physician, - over 100,000. It has more than 100 medical schools, as well as many homeopathic hospitals, nursing homes and research centers. In Scotland, 90% of family practitioners use homeopathy in their practice. 40% of the public in France regularly use homeopathy. As the physical basis of this science is becoming clear, its acceptance is growing in all ranks of society. It won't be wrong to say - 'The Future Belongs to Homeopathy."

“Homeopathy is wholly capable of satisfying the therapeutic demands of this age better than any other system of school of medicine." Dr. Charles Menninger, M.D.
“Homeopathy is a highly developed health practice that uses a systematic approach to the totality of a persons health. Anyone seeking a fuller understanding of health and healing will find homeopathy extremely important and applicable."
Gay Gaer Luce PhD (Science writer - twice winner of the national science writer's award).
“Effective Natural remedies that have no side effects." Dr. Robert Mendelsohn, M.D. Professor University of Illinois Medical School and Best Selling Author. 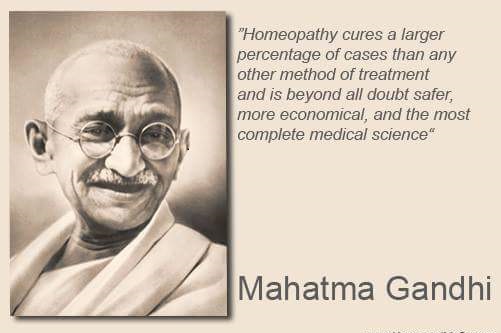